History of the ASA

The first recorded meeting of representatives of swimming clubs was held in the German Gymnasium, London, on 7th January 1869, when it was resolved that an Association composed of the London Swimming Clubs should be formed and have as its objects the promotion and encouragement of the art of swimming. Later that year the title of ‘Metropolitan Swimming Association’ was assumed and a code of rules was drawn up in 1870 for the management of the Games of Football in the Water, proving that some sort of Water-Polo was then played.

The only National Championship in 1869 was the One Mile. The 100 yards was instituted in 1878 with the 500 yards Freestyle, the latter being cancelled in 1935. In 1873 the name was changed to that of ‘The Swimming Association of Great Britain’, although it did not include Scottish clubs; in fact, an application in 1878 from an Association of Scottish Clubs to join was not entertained.

In 1880 Horace Davenport became the Association’s President, and this was a turning point in the history of the Association. The previous year, a race known as the ‘Lords and Commons Race’ was handed over by members of Parliament who had presented a trophy for it, and is now known as the Long Distance Championship, swum for many years in the River Thames. At this time there were nine London and eleven Provincial clubs in the Association, but this number gradually increased each year.

In 1883 copies of the Laws of Amateur Swimming were distributed in various parts of the Continent and in America. In 1884 the Otter Club resigned its membership over amateurism and eight other clubs followed and formed the Amateur Swimming Union. The President, Horace Davenport, resigned and for two years an almost continuous feud took place. When the position became intolerable, Mr Henry Benjamin of the Cygnus Club brought the leaders of both sides together. By considerable tact on his part, at a meeting in 1886, it was resolved that the Association should be called ‘The Amateur Swimming Association’, a title it has retained ever since.

The objects were revised to include the control of race meetings and the uniformity of rules, and to enforce the observance of the laws. A new definition of ‘amateur’ was also made. Under its new constitution the ASA carried out its work through an executive committee instead of the whole body as in former years.

Its power grew steadily and with the increase of work, provincial business was often delayed. This caused agitation in the provinces and when the ASA tried to form Local Centres in England and Ireland and enforce its laws, with the consequent suspension of some Manchester swimmers, the delegates of the Northern Clubs declared their intention to form a separate association. An ASA meeting was held on the same night in London and telegrams were despatched from one meeting to the other, with the result that three ASA delegates went to Manchester to confer with the Northern swimmers.

After long and bitter arguments it was finally agreed that the scheme proposed by the ASA for the ‘Better Management of Amateur Swimming’ should be accepted. It was the casting vote of the Chairman, Mr C G Plumpton of Barnsley, which decided the matter. The scheme allowed the Northern Counties to have jurisdiction over all parts of the country north of 53 degrees and until a Midland Association was formed the ASA would control the remainder.

The Midlands then made representation with the result that in 1889 it was agreed that the ASA should be divided into three Districts, Northern, Midland and Southern. At the first Annual General Meeting in 1890 the Association consisted of 135 clubs, South 78, North 39, Midland 18. Its first President was again Horace Davenport, who remained in office until 1894 when one of the North’s strong men, William J Read, father of the Association’s former Honorary Solicitor, became President.

In 1893 one of the most famous names in the history appeared, George Pragnall, later Sir George of Bristol, who became Honorary Secretary and the first President of the Western counties in 1901. Sir George remained Honorary Secretary until 1903 when he became President of the ASA. On accepting office he made a list of reforms he intended to bring forward, believing that it would only take two years. To his surprise he was bitterly opposed, but eventually won through, and after ten years handed over to George Hearn (another Westerner) who became the first Honorary Secretary of FINA in 1908.

In 1891 two prominent members of the ASA – Archibald Sinclair and William Henry – because of the failure of the ASA to include the art of life-saving in its objects, formed the Swimmers Life-Saving Society, later to become the Royal Life Saving Society. In 1901 the Association was divided into five Districts in the manner we know today.

The North-East took the eastern side of the Pennines, to include Yorkshire, Northumberland and Durham, and the Western Counties the counties of Cornwall, Devon, Dorset, Gloucester, Somerset and Wiltshire. The Association had the distinction of taking a leading part in the organisation of the Olympic Games in London in 1908 at the White City, and again in 1948 at Wembley.

The first Women’s Championship, the 100 yards Freestyle, was instituted in 1901. Diving came under the control of the Association in 1935 when the Amateur Diving Association was wound up and the ASA Diving Committee formed.

Junior Championships were instituted in 1947 at Hastings. 1948 saw the ASA again taking a leading role in the organisation of the Olympic Games held in Wembley. In 1952 Alice M Austin of Beckenham Ladies Swimming Club, became the first woman President of the ASA. 1956 saw Judy Grinham become Britain’s first Olympic swimming Gold Medallist for 32 years when she won the 100 metres Backstroke in Melbourne. Anita Lonsbrough won the Olympic 200 metres Breaststroke Gold Medal in Rome 1960 in a world record time.

Exactly 100 years after the first reported meeting at the German Gymnasium, the ASA Committee held a meeting at the nearby Great Northern Hotel to mark the Centenary of the commencement of celebrations which lasted the whole year. These were momentous and stimulating, and the outstanding feature was a special gala at the Crystal Palace Sports Centre, when our Royal Patron, Her Majesty Queen Elizabeth II and the Princess Anne, were principal guests.

During its existence, the Association has had many wonderful personalities among its administrators. None stand out more than Harold Fern, who was Honorary Secretary of the Southern Counties from 1905 to 1921, when he became Hon. Secretary of the ASA. At the 1970 Council Meeting at Eastbourne, Mr Fern did not seek re-election and so completed 49 years in that position. He held every important office in the swimming world, being President of the ASA in 1934 and made a Life President in 1961. He was President of FINA for 12 years, another record, and was its only Honorary Life President, a position he also held in the European Swimming Federation (LEN).

Prior to his death at the age of 94 years on the 22nd August, 1974, word was received from the International Hall of Fame, Fort Lauderdale, USA that Alderman Fern, as an outstanding contributor, would be inducted as Honoree of the Hall of Fame at the Next Honoree Ceremonies on the 16th May 1975.

At the same ceremonies, Capt. Bert Cummins, a Past President of the Association and founder editor of the Swimming Times, John Trudgen of London after whom the Trudgen stroke was called, and William Henry, co-founder of the Royal Life Saving Society and an ASA National Champion of the last century, were also similarly honoured.

At the Eastbourne Council Meeting in 1970 it was unanimously resolved to appoint a professional Secretary. Subsequently, Norman W. Sarsfield, M.C., Hon. Secretary of the Education Committee, was appointed by the ASA Committee from a number of applicants.

In 1971 the ASA took over the ‘Swimming Times’ from Capt. B W Cummins, the founder Editor and Past President of the ASA and is now controlled by a Board of Directors.

The first National Age-Group Championships were held in 1972. Sponsorships were increased as part of the Sports Council’s `Sport for All’ campaign, an award scheme for adult swimmers was launched and has subsequently proved very successful.

Due to the energy and foresight of its Officers, the Association purchased its own offices building in Loughborough and this was officially opened on the 23rd March 1973, in the presence of the Mayor, by Alderman Fern and suitably named ‘Harold Fern House’. These premises have now reached capacity and the ASA operates from four different sites in Loughborough.

For the first time since the 1948 Olympics a major event came to Britain, The Junior European Championships, these were held at Leeds in the August of 1973. To put the ASA in the forefront of governing bodies with our pioneering work, a major re-structuring of the examinations for teachers and coaches commenced in 1974.

In 1975 the Great Britain’s Men’s Swimming team in the World Championships at Cali, Columbia, were awarded the BBC Sportsview Trophy for the outstanding team performance during the year. David Wilkie became 1976 Olympic Champion for the 200 metres Breaststroke in Montreal.

1980 saw Duncan Goodhew win the 100 metres Breaststroke Gold Medal in the Moscow Olympics. In 1981 Masters swimming was introduced at a National level.

A major development in sport was drug testing which was introduced by the Sports Council in 1984. Also in 1984 John Verrier was appointed the first Director of Education and in 1985 Derek Stubbs was appointed the first Director of Swimming. In 1987 the Derby Baths in Blackpool which had played a significant part in the history of swimming closed and the first European Masters was the last major event to be held there.

The Olympic Games were held in Seoul, South Korea in 1988 and Adrian Moorhouse won Britain’s only swimming Gold Medal in the 100 metres Breaststroke. Ken Martin, MBE, an Honorary Life President, died on September 20th 1988, aged 86. His contribution to swimming was considerable – the Martin Report shaped the future development of swimming in the early 1970’s and beyond.

The beginning of the 90’s saw more changes confronting swimming in the form of Compulsory Competitive Tendering. New Health and Safety rules for swimming pools, the Education Reform Act bringing in compulsory swimming for Key stage 2 pupils and National Council for Vocational Qualifications which will see changes in the content of the Association’s Coaching and Teaching Certificate. The England Team were in Auckland during January in 1990 for the Commonwealth Games where Adrian Moorhouse equalled the World, European, Commonwealth, British and English 100 metre Breaststroke record. March saw the opening of the Ponds Forge Pool in Sheffield built for the World Student Games and for the first time in many a year the Association had a pool they could use that was a credit to the country.

1992 brought us round to another Olympic year with Nick Gillingham taking Bronze in the 200m Breaststroke. In 1993, Sheffield hosted the European Championships, the first time that they had been in this country since 1938. Our swimmers lived up to the expectations of the home crowd, with Nick Gillingham taking his thirid European title at 200m Breaststroke and added a silver in the 100m. Paul Palmer took silver in the 400m Freestyle, whilst Bronze medals went to Karen Pickering (200m Freestyle) Marie Hardiman (200m Breaststroke) Martin Harris (100m Backstroke) and the Womens 4x200m Freestyle team and the 4x100m medley team and the men’s 4x100m medley team.

1996 was an Olympic year, this time the venue being Atlanta, U.S.A. Success came from Paul Palmer in the 400m Freestyle with a silver medal in a personal best time and Graeme Smith in the 1500m Free with a bronze in a new British Record Time. 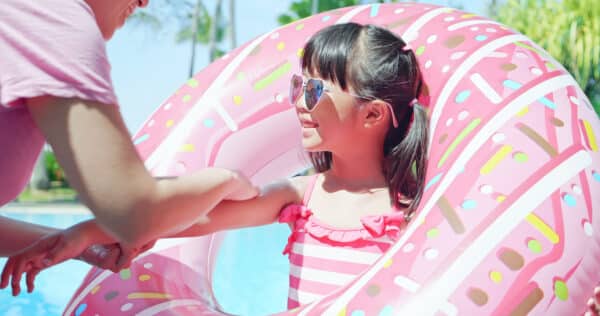 Sun Safety and Sunscreen Usage Tips   Summer is all about fun in the sun! Splashing in the pool, hanging out with friends, grilling burgers 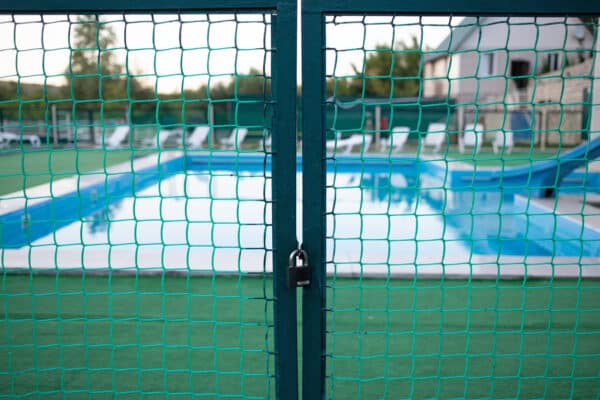 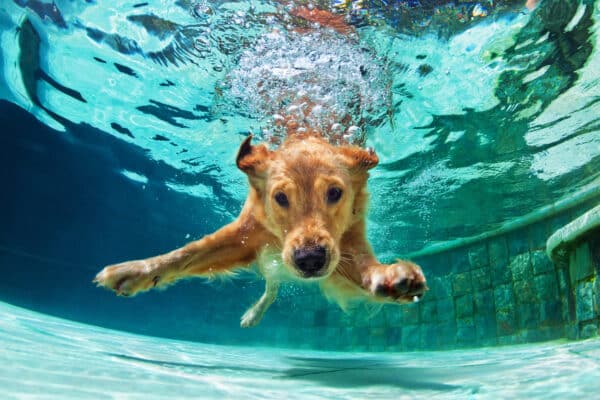 Dogs and the Swimming Pool

Dogs and the Swimming Pool   Now that it’s getting to be swim season, it’s not just the two-legged family members that want to dive